Witness: A lawyer's journey from litigation to liberation

Witness speaks to something innate in each of us: the desire to feel connected to those around us and live from our highest potential as human beings. This was brought home in Sirotkin’s first meeting with Archbishop Desmond Tutu in South Africa, while Sirotkin co-chaired the International Monitoring Project of the South Africa Truth and Reconciliation Commission. Tutu smiled as he told the author, “We are human through our relations with others. If I undermine your humanity, I dehumanize myself. This is ubuntu.”

​As an activist litigator for social causes in America, Sirotkin engaged in the “good fight,” but felt something missing. Learning to actively live and work from ubuntu became a roar of awakening to a journey from litigation to liberation. Witness is filled with profound moments of compassion and quiet heroism from world famous activists and un-known women and men whose lives will inspire you to be the change the world needs, now more than ever.

See praise for witness under testimonals 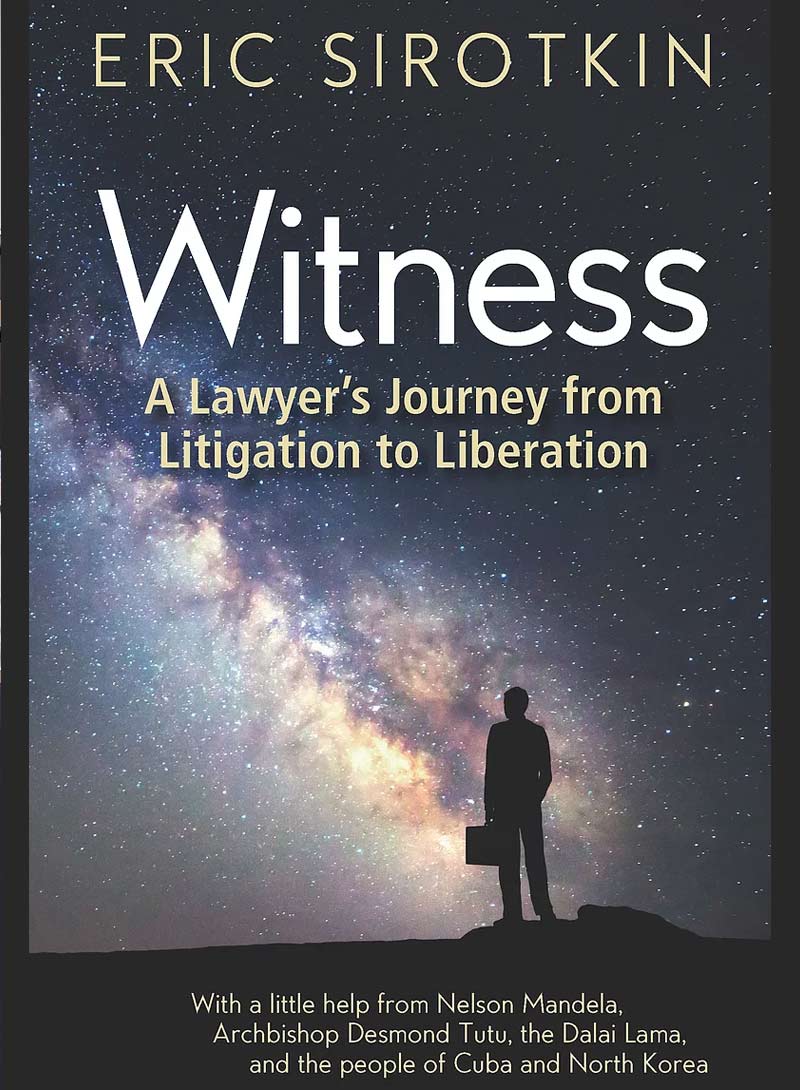 Also available at  your local bookseller 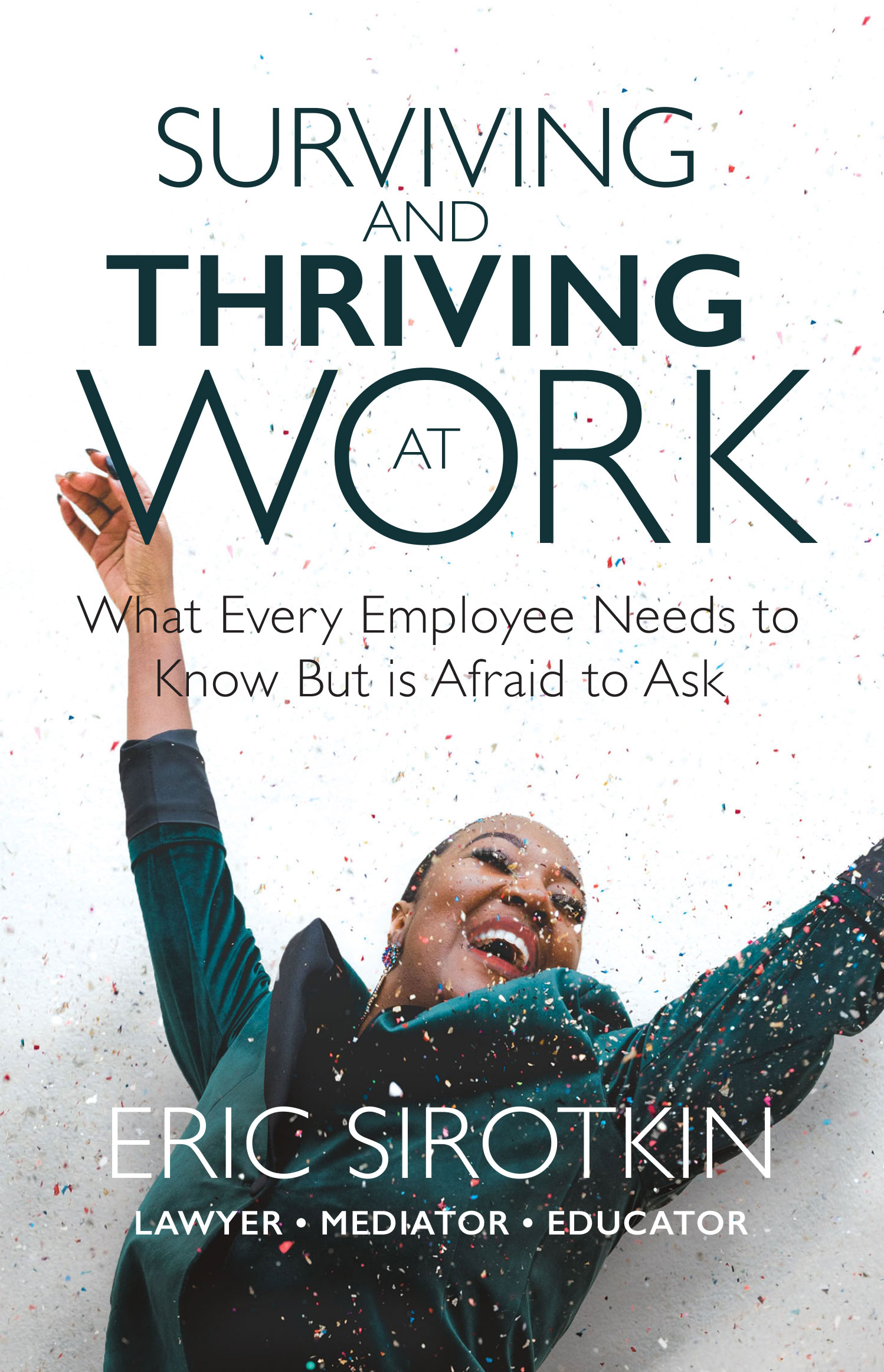 Surviving and Thriving at Work

What Every Employee Needs to Know But is Afraid To Ask

Filled with stories and advice, Surviving and Thriving at Work is a practical guide from Eric Sirotkin’s decades of counseling employees and litigating cases.

Protect and empower yourself by deepening your understanding of the modern workplace and developing creative skill sets to resolve and diffuse conflict. Become versed in your rights and learn key strategies on how to effectively assert them.

"Marching in the street and protesting is important, but it will be creativity that makes change." – Eric Sirotkin

Committing Poetry in Times of War, winner of the 2007 Poetry Film of the Year,* is a poetic glance at one week in March 2003, which rocked New Mexico, USA, and defined the struggle of a nation at war abroad and with its people. When the Iraq war began, Youth Poetry Slam Team Coach, Bill Nevins, was fired from his teaching job, and his outspoken Rio Rancho High School Poetry Team was disbanded and silenced. Days after Nevins’ removal, hundreds of peaceful protestors demonstrating nearby were brutally assaulted by police. Free Speech Zones were enforced at gunpoint. The fabric of the Constitution appeared to be crumbling. Yet out of this fire arose a diverse community of artisans, poets, and musicians. They came together in a series of unifying events, which began in Albuquerque, but spread across the country. Dubbed Poetic Justice, it defied the fear tactics of the day by modeling free speech and supporting Nevins’ quest for justice. The Poetic Justice voices are a testament to the power of the creative spirit within us all and present a path to transformation and hope in these troubling times. 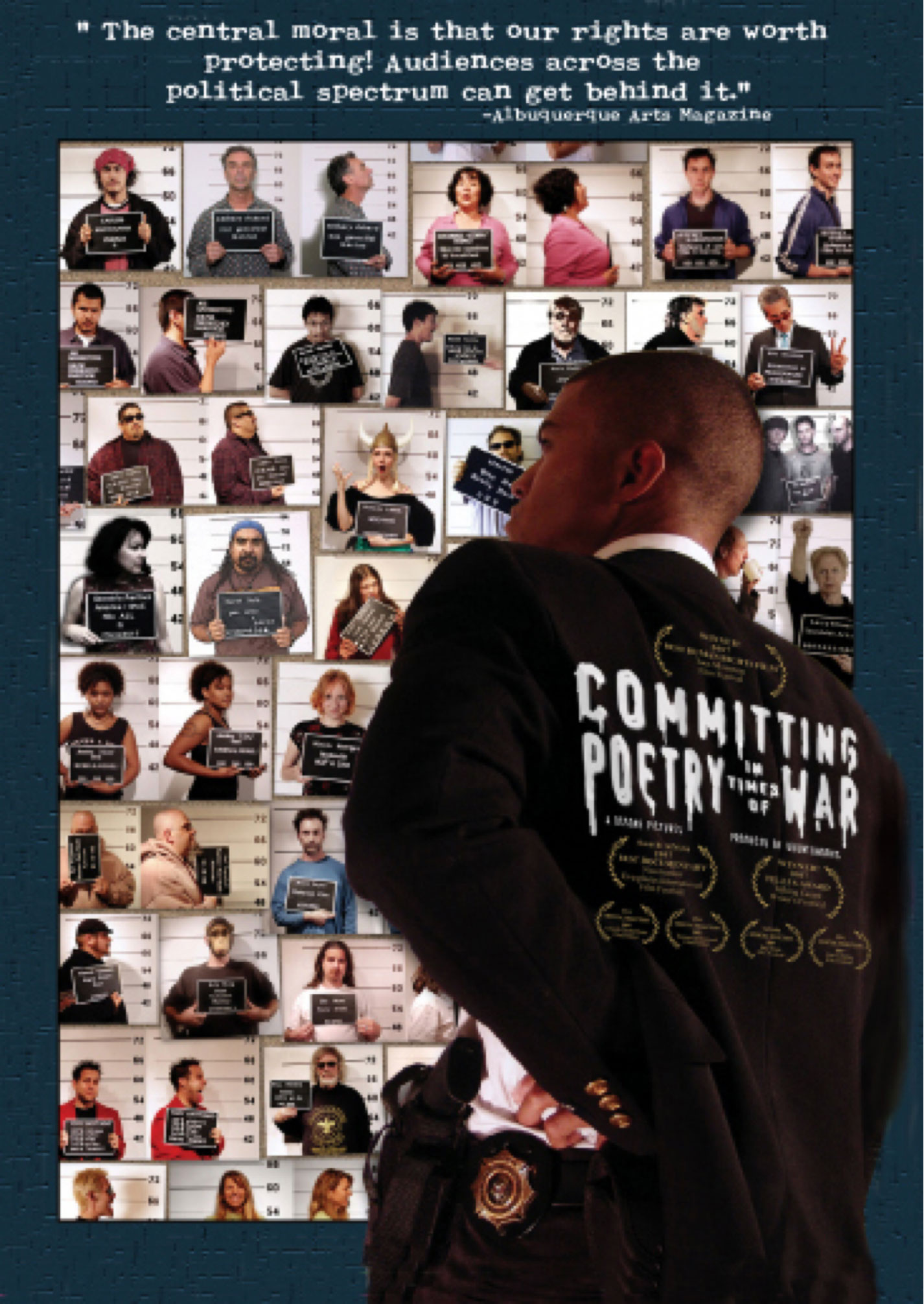 Q & A with Eric Sirotkin

What does it mean to be an active witness?

We all have experienced the frustration of a world out of control. Being an active witness means we do not have to be passive witnesses to the challenges of our times, but can actively find out way to stand for change. We do not have to become victims but can find ways in our everyday lives, in our work and in our community to carefully witness what is happening and have an active response to it. How we choose to respond to the world around us can determine the future of humanity.

What is this ubuntu you talk about isn’t he book and how did you discover it? What is the impact it has had on you?

Ubuntu, as Archbishop Tutu once told me, is the “essence of being human.” It is the understanding that we are connected, not separate and that everything we do impacts others and the world around us. I learned about it first in South Africa working with the Truth and Reconciliation Commission, where the statute said, “there shall be ubun-tu rather than victimization.” We all have a connected interest in our future. To divide the world between “us and them” or “victim and perpetrator” ignores a deeply held truth that exists in most non-dominant cultures around the world. As I experience in the stories in Witness, the discovery has changed the way I practice law and how I view the world. It has made me a more compassionate warrior for peace. But what stands out most is that it continually re-minds me that we are a hair’s breath away from great change. That it is just a changing of our angle of vision from a filter of separation to one of ubuntu that changes everything — our relationships and our very definition of success.

You write about several trips to North Korea? With tensions increasing, what do your experiences teach us about how to deal with this more than 70-year conflict?

My heart feels so sad for the separation of the Korean people and the forces that maintain this instability in Asia. My discovery of a true roadmap for peace as laid out in Witness, is not simply about politics and visiting North Korea. It’s gleaned from my years of dealing with separation in conflict in courtrooms, the racial and class divisions of South Africa, and our own separation from our heart. I’ve also been to South Korea and met with government of-ficials and activists, as well as having gone to the US State Department and Congress to propose alternative ways to viewing this dispute. I put the Korea chapters at the end of the book as my roadmap to peace can apply to anyone’s individual conflict or to international relations. We cannot demonize and expect peace. As Aleksander Solzhenitsyn said, “If only it were so simple! If only there were evil people somewhere insidiously committing evil deeds, and it were necessary only to separate them from the rest of us and destroy them. But the line dividing good and evil cuts through the heart of every human being. And who is willing to destroy a piece of his own heart.”

You’re a unique lawyer who seems to have risen above the fray and approaches conflict differently. How do you do it in such an adversarial profession?

I’m still learning. It’s a lifelong journey. But what I have discovered over the years is that you do not have to ac-cept the battle. And it’s not just me. There are thousands of lawyers practicing “collaborative law” in family relations, holistic lawyers, and those who have used mediation to find common ground. Victim/perpetrator programs explore law as healing and we can learn to be made greater from conflict, instead of being destroyed by it. Lawyers burn out after a number of years most often from growing tired of the battle. We can practice non-violent advocacy and be better human beings along the way.

In Witness you describe some powerful experiences that emerge from almost spiritual experiences? How do those encounters impact your message?

Some of them are pretty out there I admit. What I have learned most from them is the power of an open heart and to not accept that we know everything. When you have a very different experience it helps you to think out of the box and help change the way we view our place on the planet. Particularly in these times of drone attacks, police abuse, and disempowerment, we need to go a little deeper and not be afraid of what lies just behind the human imagination.

You’ve been fortunate to travel the world, from Europe, to India, to Cuba and Asia. What about that activities impacted you as a human being or a lawyer?

It is hard to look into the eyes of children or play sports or games with your “enemy” without feeling a human connection that lies beyond the geo-political framework. There is more that unites us than separates us and we spend too long on our differences rather than celebrate our commonality. Connection actually makes war impos-sible. We cannot bomb those we have known and whose love of family, safety and joy is so universal. Most wars hap-pen with a deep depersonalization campaign.

You started young as peace activist. What does peace mean to you and why is it such a marginalized concept in our world?

Peace is so much more than the absence of war. It is a state of being. It is a way of life. It is about relationship and the power we have to build a world we can be proud of, rather than tear it down. Peace is about Ubuntu — that we are all connected and the awareness that brings. Too often the peace movement has ignored the bigger picture and further divided us into opposing camps. This does little to build a more peaceful world. It’s why I could dine with North Koreans, or with State Department managers, or politicians and still laugh, cry and maintain my connection to something greater.

What do you want the reader to get from Witness?

Mostly inspiration that they can make a difference in our world. I hope it will make people laugh, cry, and envi-sion something greater for themselves and the planet. My liberation has been from my cynicism, from my sense that I am in a battle with others. What emerges for me, and I hope for others, in a sense that they can change the world and that we no longer have to settle for less. My experiences came to me by choice, plugging in and reaching out. It’s about relinquishing the result and realizing that it is about the process. How we walk in this land, separate or con-nected, will determine the fate of the human species. And it’s fun too.